Chugging away, tra la la, one bit at a time. Almost got the hang of this "at least once a week" thing for updating, three times in a month is better than my usual rate.

I'm very pleased to say that Technobabylon is coming along nicely, and still within planned schedule parameters despite being in wholly alien territory at this stage. By the end of tomorrow, the sixth section of the game will have been developed and made playable (though not bug-free, or necessarily entirely comprehensible - that's what comes after), meaning that as a game, it's half-way there! 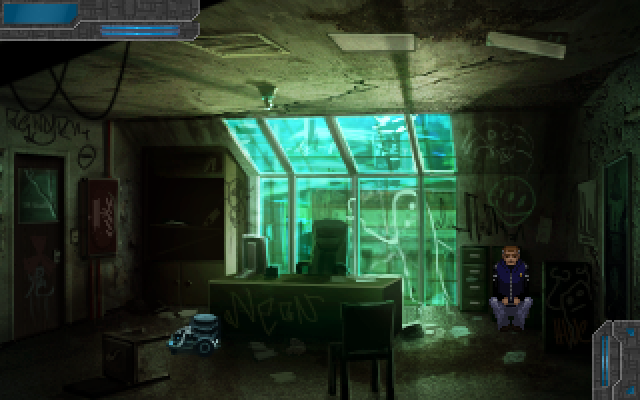 This last fortnight's work has returned to Dr Regis' story. Without giving anything away, Dr Regis is  on the run, and seeking refuge within an abandoned factory in a less salubrious part of town. More fantastic artwork from Ben as you can see, with lots of hidden meaning to the graffiti all over the walls.

Also, congratulations to Wadjet Eye on the release of Blackwell Epiphany. I know for certain how hard everyone's been working on it, and if you're into adventures, phantasms, or New York, I recommend giving it a look!
Posted by Unknown at 02:51