Thanks to the magic of "doing things the sensible way", I've given the homepage (www.technocratgames.com) a bit of a rejig for its new upcoming games, and decided to start using this blog for news and updates. After all, this thing is designed to be updated, whereas raw html is a load of [helpful friendliness] to make new posts on.

Oh yes, did I say "new games"? No, I said "upcoming games", pay more attention. Since it's been more than a year since the Bake Sale, The Rail has officially been released to those who were too cheap to give money to charity, as have the other Bake Sale games. Give it a go, it's on the main site, on a big button on the left. You can't miss it, unless you're illiterate.

The other upcoming feature is the re-release of Nancy the Happy Whore. Given a few months, there now exists voicing for the whole game (English only, sorry!) designed to lure folk in who don't have it yet. Apparently, Finland has some of the best English-voice actors I've ever heard, so I shall remember to look in that part of the world in future.

Keep an eye on the site (and this blog) for further information on Technocrat Games - Nancy will be strutting down your street in April, but definitely after the 5th, since that's when the new tax year starts. Hookering, after all, counts as self-employment and means she has to fill in all sorts of forms for the tax-man. 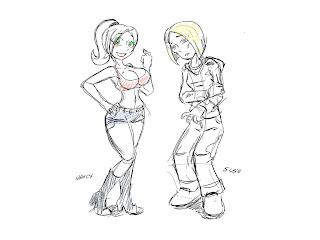 In the meantime, here's some delightful artwork from Felipe Bende, whose services I have acquired for the creation of some publicity material.
Posted by Unknown at 18:55